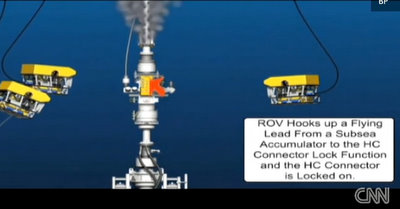 BP is reporting that the new containment seal procedure is going as planned. CNN reports that according to BP’s Senior Vice President Kent Wells.

“We’re pleased with how it’s going,” Wells said, but cautioned that the operation, which began Saturday with the removal of the old cap, is only in its second day.

The new containment seal caps that BP is now attempting to get in place, if successful, could completely halt the oil gushing from the broken pipe. The oil started gushing from the pipe on April 20th after an explosion occurred on the BP oil rig killing 11 people.

BP warns however that the containment seal is only a temporary fix, and that the long term fix will come when the relief wells are completed.

BP is reporting that one of the relief wells could possibly be in place by the end of this month (July).

Here’s video showing how the new containment seal will be set in place by BP in order to stop the gushing oil from the broken well: