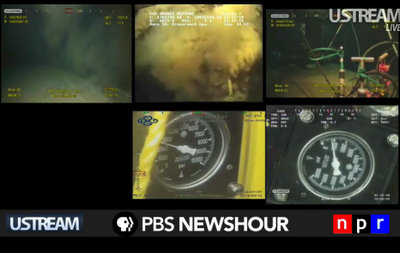 BP has completed the replacement of a critical choke line to the new seal cap on BP’s leaking oil pipe. The choke line was a critical piece of equipment in the testing of the integrity and pressure of BP’s new seal containment cap.

According to CNN, testing on the new seal containment cap is intended to measure the pressure readings from BP’s leaking oil pipe, and the tests are scheduled to last 48 hours, according to retired Adm. Thad Allen, the government’s response manager.

If successful, BP will slowly close the valves of the seal cap hoping to completely shut off the gushing oil from the Macondo well.

US government scientists and engineers have estimated that between 1.5 million to 2.5 million gallons are flowing into the Gulf every day.

As a word of caution, BP warns that should the testing be sufficient to start closing valves, the contained pressure may causing leaks to burst in other sections of the pipe. Basically, we could have more or even worse sections of the pipe exploding and oil gushing into Gulf.