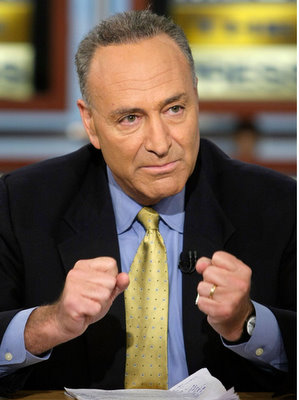 New York State Senator Charles Schumer has written a “I am not at all pleased with you, Apple” letter to Steve Jobs over the way Apple has responded thus far to the iPhone 4 antenna issue.

Senator Charles Schumer ‘expresses concern’ over the whole iPhone 4 reception issue and is less than pleased with the way Apple has responded – or I should say, the lack of response – to this issue.

One of the biggest concerns that Senator Schumer expresses in his letter is the fact that Apple has yet to offer a ‘free of charge’ fix to the antenna and reception issue for current iPhone 4 owners, and finds it completely unacceptable of Apple to expect customers to have to pay their own money for a fix.

I write to express concern regarding the reception problem with the Apple iPhone 4. While I commend Apple’s innovative approach to mobile technology and appreciate its service to millions of iPhone users nationwide, I believe it is incumbent upon Apple to address this flaw in a transparent manner. According to Consumer Reports’ review, released Monday on its website, the iPhone 4’s signal-strength problem is a hardwire glitch triggered by gripping the device in a particular manner. This finding, according to Consumer Reports, “call[s] into question” Apple’s recent claim that the problem is “largely an optical illusion caused by faulty software.” Consumer Reports declined to recommend the iPhone 4 because of this hardware design flaw.

Given the discrepancy between Consumer Reports’ explanation of the reception problem and the explanation provided by Apple in its July 2 letter to customers, I am concerned that the nearly two million purchasers of the iPhone 4 may not have complete information about the quality of the product they have purchased. The burden for consumers caused by this glitch, combined with the confusion over its cause and how it will be fixed, has the potential to undermine the many benefits of this innovative device. To address this concern, I ask that Apple provide iPhone 4 customers with a clearly written explanation of the cause of the reception problem and make a public commitment to remedy it free-of-charge. The solutions offered to date by Apple for dealing with the so-called “death grip” malfunction-such as holding the device differently, or buying a cover for it-seem to be insufficient. These proposed solutions would unfairly place the burden on consumers for resolving a problem they were not aware of when they purchased their phones.

I also encourage Apple to keep its promise to provide free software updates so that bars displayed accurately reflect signal strength; I further urge Apple to issue a written explanation of the formula it uses to calculate bar strength, so that consumers can once again trust the product that they have invested in.

I look forward to Apple’s swift action on this matter, and once again laud Apple for its innovative efforts and service to millions of Americans.

Schmuck Schumer should worry more about running our State of New York than whine about an iPhone. Talk about a lame attempt at garnering publicity.

senator schumer i hope you get to read this, so many people in state jobs work so hard and thay loose there, when so many in other state jobs take theres for granted. i say that because im a tax payer i worked so hard over the years paying taxes, well when i got sick i ended up in a state run housing a lot of the staff treated us like yesterdays garbage. sure u can agree this is not a wise investment of our tax doller when you ask them to do somthing thay make you feel like you are bothering them,they will be watching tv or plaing card games on line. im sure you agree, our tax doller can be spent better than that. those job should be givin to those who realy deserve them you should realy send someone to check this place out. and dont let them fool you, you know when people know your cummin thay prepair for you i worked all my life and i never stayed on a job i didnt enjoy doing, those jobs should go to those who diserve them, and not to these slackers. there are a lot of nice people who work at the A.L.R. that sould work there, but the rest are waisting space,draining tax payers. if you want me to stand up for you on election days ill be proud to expecialy knowing you stand up for the tax payer. by the way the name of this place is A.L.R. 1111 s. clinton ave its ran by the state of ny R.P.C. i realy hope you get this. al