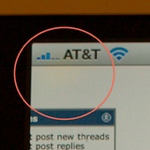 The web started to buzz around the issue with dozens of videos flooding Youtube of consumers reporting the same issue.

So the iPhone 4 death grip became such a buzz today that Apple finally decided to release an official response to the drama.

“Gripping any phone will result in some attenuation of its antenna performance with certain places being worse than others depending on the placement of the antennas. This is a fact of life for every wireless phone,” Apple said. “If you ever experience this on your Phone 4, avoid gripping it in the lower left corner in a way that covers both sides of the black strip in the metal band, or simply use one of many available cases.”

Perhaps Apple has a point here about every wireless phone having this issue. But you better believe that companies like HTC, Google, and even Verizon, will respond with their own testing to prove that what Apple claims is not true – that only the iPhone has this problem.

Mark my words – it’s only a matter of time before one of the other companies comes out with test results showing that their wireless phone does not cause the same problem that iPhone 4 users are experiencing.