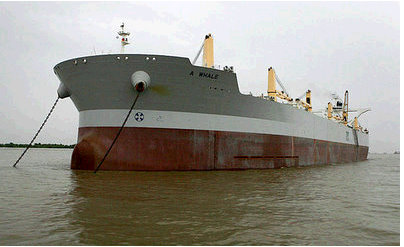 The massive vessel called the A Whale Skimmer that was dispatched to the Gulf of Mexico to assist in the oil spill clean up process was relieved of duty yesterday by the Coast Guard stating that the vessel was ineffective at capturing and processing spilled oiled.

The A Whale Skimmer was unable to capture large amounts of water from the Gulf due to BP’s excessive use of chemical dispersant COREXIT.

The use of COREXIT 5000 feet deep at the gushing oil pipe created highly dispersed oil on the surface of the gulf waters. This mass dispersing of oil made it difficult for the A Whale Skimmer to capture any substantial amount of oil.

So the company that sent modified the A Whale vessel into an oil skimming monster will unfortunately see it’s ship return back to Taiwan without a huge contract for oil cleanup.