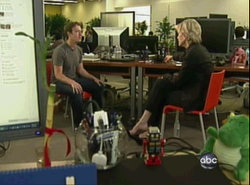 Facebook CEO Mark Zuckerberg sat down today with ABC’s Diane Sawyer to talk about Facebook reaching 500 million users. During the interview (watch below), Sawyer asked Zuckerberg about the allegations by Paul Ceglia that he has a contract stating he has a right to 84% ownership in Facebook. Zuckerberg answered the question with this: “I don’t think we — that — if we said that we were unsure, I think that was likely taken out of context,” he said. “Because I think we were quite sure that we did not sign a contract that says that they have any right to ownership over Facebook.”