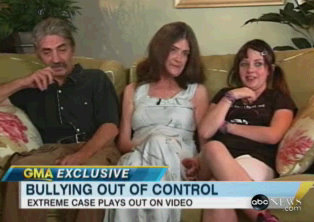 The 11 year old who made controversial videos on Youtube in an effort to “get back” at those who were harassing her has appeared with her mother and father on Good Morning America. The videos that 11 year old Jesse Slaughter created have led to death threats and a psychological evaluation in what experts say is a stunning case of cyberbullying spinning out of control.

The appearance on Good Morning America today has skyrocketed the attention that Jess Slaughter’s videos have been receiving, and have brought to light a serious issue on the Internet – cyberbullying. In essence, Jesse Slaughter turned to the internet – and specifically to videos – as a weapon.

this girl is so ridiculus. of course people are going to have an opinion

this girl is so ridiculus. of course people are going to have an opinion

It's great how the news has spun this story. The story is now about how an innocent little girl is fighting back against bullies – not the real story. The real story is that a loud mouth little girl became a bully, and picked on the wrong kid. If you followed the story, you'd know that Slaughter took the first swing – and is far from innocent. Anything for ratings right? Who cares if the story is true or not? How far can one twist the truth before it becomes a lie. And what of the parents? Your 11 year old is posting hate charged, swear filled rants – talking about how s*xually active she is – and posting naked photos of herself online… and you do nothing? In fact, you encourage and condone her behavior? This isn't a story about how an innocent little girl is the target of cyber bulling gone wrong – it's the story of how a bully picked on an even bigger bully and got taught a lesson that her parents should have never allowed her to be in the position to learn. Here is a suggestion to "Slaughter"'s parents – Try parenting your child. It's this new thing that seems to work.

Exactly, they made her look like she was this poor victim, she admitted she slept with a 24 year old guy, and he admitted it too.
Personally I think she needs to be taken by CPS and put into foster care, or we will see her on Maury in 2 years trying to find her twins baby daddy, and then on Jerry Springer because her Mom slept with her husband and her Husband's Mom at the same time.

That’s not even the truth its a bunch of crap

What a disgrace. This little girl is a piece of crap. She claims she's bi-s*xual? She's eleven! Does she even know what that means? Look at her family too. She's just a nerdy little girl, starved for attention, who started trouble and got a bite in the ass. This story sickens me, the press spin sickens me, and her parents sicken me. Good job America! This crap makes headlines and nobody cares about the real problems we face.

CONSEQUENCES WILL NEVER BE THE SAME!

She’s probably just an actress. I refuse to believe someone is this stupid.

Internet isn’t real life. If someone says they are going to harm you or say the father is f**king the daughter it is all talk. This entire thing makes me laugh b/c you’re acting like you are in the 6th grade school hallways.

This article is so biased it’s not funny. They forget to mention the fact that she was posting almost nude pics of herself all over the internet. When people had things to say about it she started making videos calling everyone haters. She told them all she was going to put a bullet in thier heads and make a brain slushie. She also admitted to having 3 boyfriends who were well over her age in years. Also she said she %^&$(hump) them till she bleeds. yes she said that. SHe called everything on and now she looks like the victem. You people make me sick. OH by the way shes back on youtube. She tells everyone that she’s back female dogs. and you can’t stop her. that’s right shes back on calling more of the internet /b/ tards back to mess with her more. I say where are her parents and WHY IS SHE STILL ALLOWED ON HER COMPUTER> SHE EVEN STILL HAS HER WEBCAM!!!