Here’s the side by side comparison of the Apple iPad vs Adam Tablet: 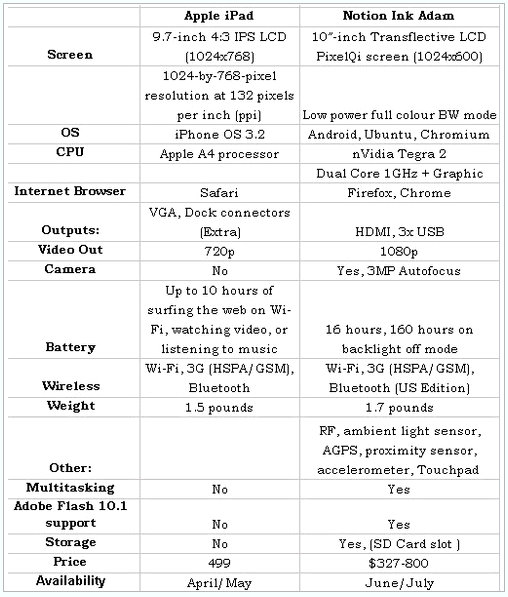 Dude you forgot some stats:

Apple’s sold over 3 million ipads already. Made $2 Billion in revenues. Already selling like in 30 countries! Adam tablet has no iTunes, no software optimized to run on it. No Word Processor, No Spreadsheet, No Database, No, No,……

Available in June/July? Isn’t it already August? And didn’t the iPad come out in March?

true… true… but since the iPad has literally defined the new tablet market, even the slightest competitor will be used as a point of comparison – even though it’s really no comparison at all.

Thanks for commenting and visiting!

release date December or January.
price $498 for highest version that is PixelQi display with wifi & 3g version. so $800 is incorrect.
Its full GPS now not AGPS. camera rotates 185 degrees

Why compare an actual shipping iPad with Vaporware? If you really want a comparison of all iPad wannabe’s, here a better link:

Forget that Adam device. That sucker is already history. Nearly no one has ever heard of it and probably no consumer ever will. Notion Ink bit off more than it could chew going up against Apple’s iPad. By the time Notion Ink sells 1000 of these devices, the iPad 2 will be announced and NI will be bankrupt if it isn’t already.

As of some time last week it had been mentioned that Apple had already sold 4 million iPads, so the score is something like 4,000,000 to zero. Producing a device like the Adam in someone’s garage won’t cut it. That’s the impression that the guy who was always demoing his single Adam prototype gave me.

For some of us no Itunes is actually a plus. And you don’t know that screen, it’s fantastic… would get the adam just for the screen.

You Apple Fanboys just don’t get it, do you? There are a lot of savvy people out there who don’t jump at the first thing on the market. The iPad is fun to use and certainly was the first of it’s kind, but whether they have sold 4 million or 10 million, it doesn’t make a difference to us. I want a machine that is tablet size but that is packed with as many features as possible. Apple’s iPad was, to me, not worth the money because 1) I can only buy software that Apple tells me I can buy, 2) it has no Flash support, 3) there is no camera and 4) external devices (USB ports, removable cards, etc.) is either limited or non-existent. It didn’t matter to me WHO produced all of these things first – only that they did it well.

If you do even a small bit of research, you’ll see that any side-by-side comparison of the iPad and the Adam clearly, unquestionably, and without a doubt prove that the Adam – if and when it is produced – is head and shoulders above the iPad in capabilities and features.

You’re right. Adam may not ever be produced. HP may never release the slate. Lenovo may never come through with their promises, and maybe Asus won’t either. But we wait. We follow the news, and we support start-ups just like people supported Apple when it was in its infancy.

I’m glad all of those 4 million people love their iPads. Good for them. But when the Adam becomes a reality (it’s in Beta now), I honestly believe that a lot of those iPad owners who love having the latest and greatest are going to wish they had waited.