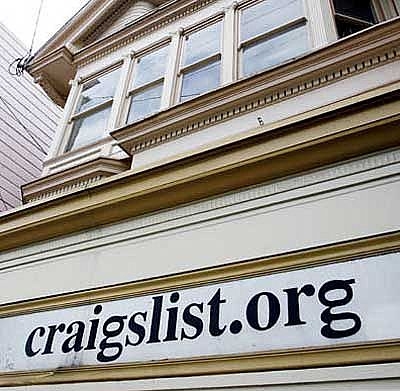 Ever wonder how Craigslist makes money?

Simply put, this is prostitution.

It is estimated that Craigslist will earn $88 to $99 million on profits in 2010, with a profit margin to revenue of over 80%. It is also estimated that per employee, Craigslist generates more than $4 million in revenue and profits of $2.9 million to $3.2 million.

The other $90 million or so is earned through recruitment advertising – basically job listings from corporations.

Craigslist stands to take home anywhere from $88 to $99 million in profit, which means the company could see nearly 80% of revenue as profits. Plus, AIM Group founder Peter M. Zollman purports that, “Per employee, it generates more than $4 million in revenue and profits of $2.9 million to $3.2 million.”

Yes and how much does EROS and the other much bigger sites make??? Leave Graigs List ALONE or go after ALL sites.