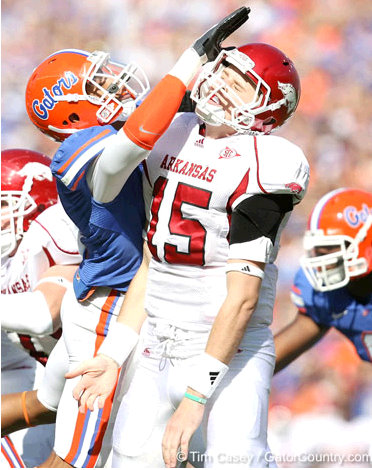 Wow, that was definitely not a smart thing to do.

Anyway, at the news conference Arkansas coach Bobby Petrino said during the interview, “And that will be the last question I answer with that hat on.”

Gork said that she grabbed the Gator’s hat without even thinking on Saturday because it was raining outside.

It is being reported that Gork has sent a letter of apology to the university and Petrino.

“Was hoping to publicly apologize to coach Petrino and UA fans on the show today … but I won’t get that chance,” Gork wrote on KAKS’ Twitter account. “I’ve been fired.”

One reply on “Renee Gork Gets Fired For Florida Gator Hat, Announces via Twitter”

It never rained at Razorback Stadium that day either. I am pretty sure there are about 2kfans who would back me up on this.

She didn’t mention that she had 4-8 hours do take it off, especially inside, asking the head coach of Arkansas questions. She Contradicts her facebook posts where she basically has everything in her home adorned in Gator garb and that it was from the trunk of her car….it came from her Bentonville, Ark home.

FACEBOOK POST: “Renee Gork Capshaw really wishes I didn’t have to get ready and work
this early on a Saturday..even if it is media day for the Razorbacks..if it
was Florida that …would be a totally different story.

Renee Gork Capshaw is thinking how wrong my current status is…I’m
sitting here in a Gator shirt, drinking lemonade out of a Gator glass,
looking at the big Gator on my diploma yet am researching and reading
stuff about the Razorbacks….this new job really is a job!!!:) ”

It was a lot worse being said on twitter she has suddenly changed the logo and blocked the account:

all of this is being documented, and so far, there are so many versions of her truth…..we can’t keep up.

“grabbed the first thing on the way out the house..”
“got the hat out of the trunk…”
“no body said a word to me, and I didn’t realize what I was wearing…”
“I covered up the gator logo before entering the presser…”
“I’m receiving death threats….”

Again she is playing to the media for attention and support from the Gator Nation – nothing wrong with that …but SHE IS ALSO LYING ABOUT WHAT HAPPENED!!

All that I ask of you before you pass judgment is to do a little fact checking and research and come to your own conclusions..