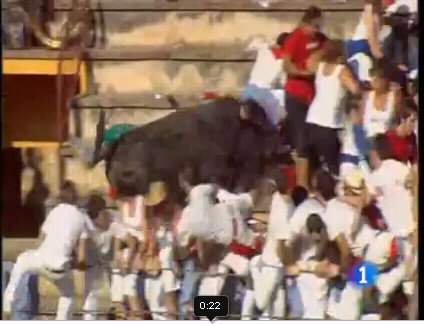 Here’s something you don’t see everyday. A bull actually jumped into the stands and started attacking the crowd at the Tafalla bullring in Spain. More than likely, the bull was just trying to escape. But unfortunately, once the bull was in the crowd, anything in it’s way was subject to harm. 40 people were injured in the bull rampage, and none were killed (fortunately). The bull was eventually subdued and killed. Below is the frightening video of the bull jumping into the crowd and then going a rampage:

One reply on “Bull Jumps Into Crowd (Terrifying Video)”

Spain should take this as a warning. This poor bull had been harrassed beforehand.

For in their anger they killed a man and maimed oxen just for fun. Cursed be their anger for it is fierce and cruel. Genesis 49:6,7