While vacationing in Connecticut, a man watched his home get robbed on his iPhone. The iCam iPhone app allowed the man to watch the entire burglary take place.

Wow – could you imagine opening up your home security iPhone app to just to check things out, and then suddenly… to your unbelieving eyes… there’s actually a burglar breaking into your house – and you’re watching live right on your iPhone! 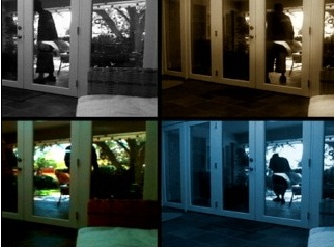 That’s exactly what happened to Vince Hunter, a home owner who was on vacation in Connecticut.

So out of nowhere, the $4.99 iCam iPhone App that he bought with his home security sent him a text message saying that his motion sensors are going off in his house.

And so he opened his iCam iPhone App and watched, in real time, as a burglar broke into his house through his windows.

“I check the footage, and see in real time guys in this area, and they’re kind of hunched over. They’d just broken the glass. I said holy cow, I gotta call 911,” said Hunter in an ABC News interview.