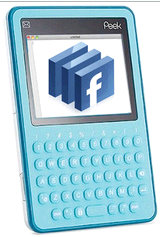 There are rumors starting to float around that we may one day see a Facebook phone. That’s right, and actual phone released by Facebook that will supposedly run on the Android OS. Although these rumors have been denied directly by Facebook, a couple of former insiders are keeping the wheels turning. And according to Gizmodo, Facebook’s recent hire of Google Android’s senior product manager Erick Tseng helps fuel the “Facebook Phone” rumor along as well.