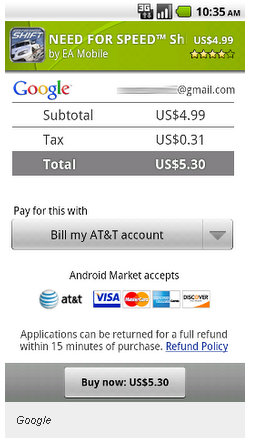 Carrier billing allows AT&T Android subscribers the ability to purchase apps from the Android market and have the purchase added to their AT&T bill.

Previously, people had to add a credit card to the Android market in order to purchase apps. Now, by allowing AT&T customers the ability have app purchases added to their monthly bill, Google is expecting a large increase in app purchases. And of course, AT&T will be getting a cut of the revenue as well I’m sure.

The only question now is, when will we see Apple bring carrier billing for iPhone and iPad apps?