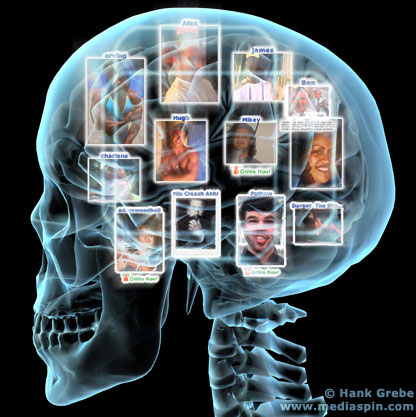 Facebook seems to have a similar pattern of functionality as neurons in our brains – a small group of highly popular neurons seem to do the most work, and have the greatest influence with other neurons.

New research at Carnegie Mellon University has found that within our brain, there lies a subnetwork of highly active neurons and these neurons behave, and have similar influence over other neurons, much like how things work in social networks like Facebook.

According to the researchers who are studying neurons and made the analogy to Facebook:

“It’s like Facebook. Most of your friends don’t post much — if at all. But, there is a small percentage of your friends on Facebook who update their status and page often. Those people are more likely to be connected to more friends, so while they’re sharing more information, they’re also receiving more information from their expanded network, which includes other more active participants,” Barth said.

This new discovery of neurons, and the ability to analyze neurons at this level, will allow researchers to gain a deeper understanding of how our human brains work.