With Blackberry still holding the number one slot for mobile phone market share in the United States, it’s almost hard to imagine that RIM, the maker of Blackberry, is actually starting to see declining growth at major U.S. carriers.

I have a friend at a major law firm in Houston who for ever, all of the attorney’s were wired into their IT network via Blackberry’s.

It would have been unheard of even a couple of years ago for them to switch over to another competing smartphone.

I remember when I first got an iPhone back in 2007, and I told my friend about it and how I thought his law firm should switch over to the iPhone (there was not Android phones yet…).

His response to me about his firm using the Blackberry was, and I quote, “our firm needs a phone for business, not to play video games…”

Wow!  That’s was actually funny to me at the time.

And now here we are nearly three years later, and his law firm has, just last week, ditched their Blackberry devices and replaced them with Android smartphones.

My friend picked the Verizon Droid 2.

Blackberry shows declining growth at the end of 2010

This is a reflection of what’s happening overall in not only the smartphone marketspace, but also to Blackberry.

A recent chart shows that RIM’s Blackberry device started to decline toward the end of 2010 at Verizon.

Here’s the chart – check out Blackberry at Verizon (brown line): 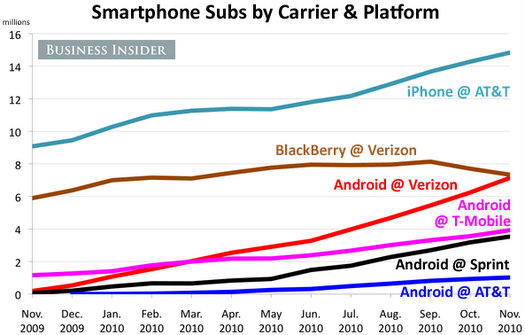 Verizon is the biggest carrier of Android devices

It’s also interesting to note here that Verizon currently has the largest number of Android smartphone subscribers in the world.

And with Verizon’s aggressive marketing of the Android smartphone, and not the Blackberry, that Verizon sees a much brighter future in something other than the Blackberry.

I can’t really say that the Android device is Verizon’s sweet spot because now the Verizon iPhone is on it’s way.

And not to mention the Verizon iPad, and the fact that Verizon is now connecting the iPad to own data network, no longer requiring iPad owners the need to purchase the Verizon MiFi device so they can get the web outside of WiFi areas.

What’s the future of the Blackberry

So now we are left to look at Blackberry and one can only wonder – what is the future like for RIM and their Blackberry devices?

It’s clear that the Blackberry cannot compete with the high end smartphone marketplace – looking at the chart above proves that.

But is there a way that the Blackberry can find that could bring it back into growing marketshare?

One would think that with the Verizon iPhone coming next month (February), that there would be even more downward pressure on the Blackberry – at Verizon at least.

So that’s not really going to help RIM whatsoever.

And with law firms like my friend’s making a sweeping change from Blackberry devices to Android smartphones, this means the Blackberry is losing the fight for enterprise domination.

The IT guys (or girls) at my friend’s law firm had absolutely not problem programming the Android phones to work with their servers and intranet.

So if the corporate world starts catching on to this, then I’m afraid that RIM is going to see continued trouble ahead for their precious Blackberry.