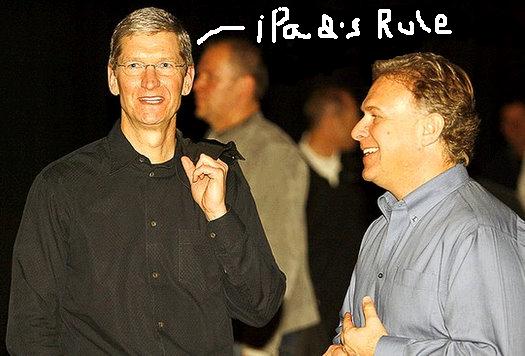 Forget about those measly little Android tablets, and those heavy, clunky, worthless Windows based tablets.

Apple’s COO Tim Cook said today that all other competitors beware – you will get beat down by the iPad!

Ok… not exactly word for word, but pretty close.

Mr. Cook was present today to talk about Apple’s first quarter numbers – which were ridiculous to say the least.  Here’s what I mean:

First quarter results which showed a growth in revenue by 71 percent and an earnings growth of 78 percent.

And Apple ended up selling 7.33 million iPads just in the past quarter alone!

Now here’s the best part, when Apple COO Tim Cook was asked about iPad competitors, here’s what he had to say – and this is word for word:

“There’s not much out there as you know. There are two kinds of groups today (in the market) — the ones using a Windows-based operating system

. They’re big, heavy and expensive. Weak battery life. Need keyboard or stylus. From our point of view, customers aren’t interested in that. Then you have the Android tablets. The variety shipping today, the OS wasn’t designed for a tablet — but Google said this. So you wind up having the size of a tablet that’s less than reasonable. Or one that’s not even a real tablet experience. It’s a “scaled-up smartphone” – that’s a bizarre product in our view. Those are what is shipping today. If you do a side-by-side with an iPad, some enormous percentage are going to pick the iPad. We have no concern there. In terms of next generation. There’s nothing shipping yet. So I don’t know. “Today they’re vapor.” However, we’re not sitting still. We have a huge first-mover advantage. And a huge user advantage from iTunes to the App Store. Huge number of apps and an ecosystem. We’re very confident entering into a fight with anyone.”