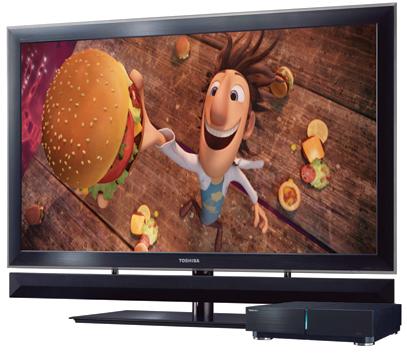 Recent polls indicate that while the 3D appeal is big in theaters, the idea of bringing 3D into one’s own home is not.  Nobody wants to be caught in broad daylight in those glasses, and it’s just one more thing to lose between the couch cushions, anyway.

Toshiba has announced a solution.

Toshiba’s Glasses-Free 3DTV (20-inch), first available in Japan, is based on technology similar to the upcoming Nintendo 3DS, the screen of which has tiny vertical slits which allows only certain kinds of light to reach the eye, effectively showing in 3D.

This will work well for the 3DS because the player would hold it at close, personal angle, anyway, but a TV may prove more difficult to adjust to.  With only 20 inches, only a small couch-full of viewers may be able to enjoy 3D entertainment at a time. (Toshiba insists that its product provides 9 different perspectives, but do nine people really want to bunch together so closely to look upon so small a screen?)

Beyond viewing angles, distance may also prove difficult to content with, Toshiba’s recommended being 35 inches from the larger model, and 26 inches from the smaller one (which is a 12-inch model).

While an impressive feat, it’s safe to say that American audiences probably won’t be trading their 40-plus-inch screens for this one, even if it is 3D.

Bio: Maria Rainier is a freelance writer and blog junkie. She is currently a resident blogger at First in Education, where recently she’s been researching kinesiology degrees and programs and blogging about student life. In her spare time, she enjoys square-foot gardening, swimming, and avoiding her laptop.