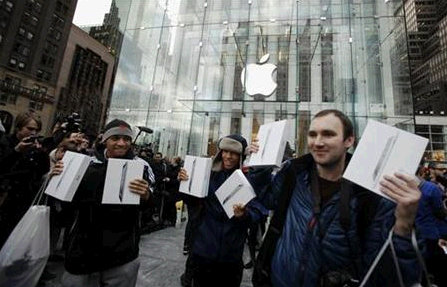 Apple’s latest iteration of the iPad, the iPad 2, went on sale at Apple stores, AT&T and Verizon Wireless outlets, as well as Target, Wal-Mart and Best Buy, and by Saturday evening, the iPad 2 was completely sold out.  The reports coming in on Saturday put the sales figures for the weekend at 1 million units.  The first iPad that was launched in April of 2010 took 28 days before it sold 1 million units. Crowds of fans waiting for hours, sometimes even days, outside of the flagship Apple stores in both New York and San Francisco just be a part of the frenzy that surrounded the iPad 2 launch.  The iPad 2 is a serious upgrade from the first iPad with it being lighter, faster, and has front and page cameras for Facetime (video conferencing and chat).