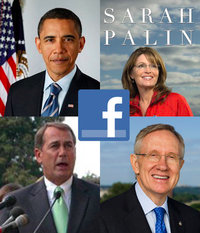 Facebook has something in it’s arsenal that few, if any, tech giants can claim. Powerful politicians in Washington are starting to leverage Facebook for their campaigns.

With this type of leverage, it’s going to be difficult for those same politicians to take aim directly at the social networking giant on issues like privacy, commerce, and other political hotspots with tech companies.

One way Facebook is capitalizing on this leverage is by hiring Washington insiders and former powerhouse players in Washington’s political scene. Case in point, Facebook is said to be hiring Robert Gibbs, former White House Press Secretary.

Also, Facebook’s COO Sheryl Sandberg served as Chief of Staff for the United States Department of the Treasury.  And Facebook’s General Counsel Ted Ullyot was a former government official with deep connections in the Republican Party.

Is the government backing themselves into a corner that they might regret later?