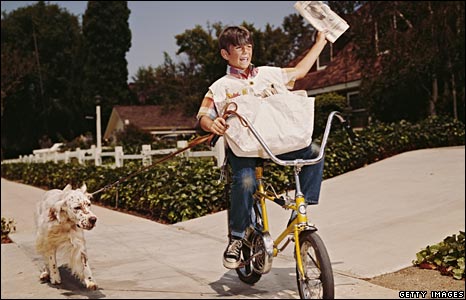 I had the pleasure of witnessing something tonight that quite frankly stopped me in my tracks!

What was it that I was watching?

I was watching the paper delivery guy drive down my road, throwing the paper out of his window with an impressive left upper hook out his driver side window – cigarette hanging out of his mouth and everything.  And then the paper flew through the air and landed and perfectly in my drive way.

No, I was not mesmorized by the scene of the guy throwing the paper.

What stunned me was the level of innefficiency that I was witnessing in the distribution of content.

I suppose because of the fact that I’m a blogger, meaning I distribute content via the web, is why this encounter had such a profound affect on me.

For a brief moment, it felt like I was time warped, like “beam me down Scottie” time warped, to a point in the past where newspapers thrived, and traditional print distribution was mainstream.

And then, like a sudden flash from an explosive bolt of lightening, I felt like I was whisked back into the future where in the amount of time this paper deliver guy made it to the end of my street (approximately 20 houses), my blog would have more than triple that number of readers that consumed at least one article.

And trust me, my blog here at SMSEO is “small fish” compared to what’s out there on the web.  The likes of Mashable, NYTimes, Huffington Post, etc… generate more visitors in one hour than my blog gets all day – no joke.

So now that I’ve come down from this traumatic event and my mind is calming down, settling even, I’m asking myself this question – why, or better yet, how is it that the newspapers continue to survive?

Yet somehow, you see your local newspaper chugging along… surviving somehow.

I have to believe, based on what I saw today, that perhaps the newspapers aren’t surviving after all.

Perhaps they are simply flailing in the water, drowning if you will, and just have not yet taken that final gasp that floods their lungs and sends them plunging to the bottom of the ocean where they will lie in ruins for eternity, and where occasionally, someone like National Geographic will venture down into the depths for a documentary on what used to be.