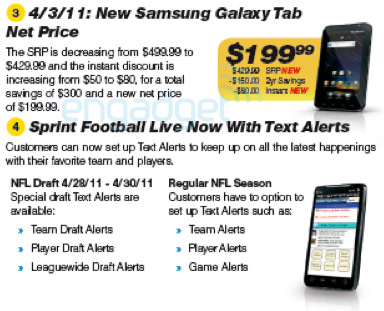 According to information obtained by Engadget, Sprint is fixin’ to cut the price of Samsung’s Galaxy Tab down from $299 to $199 starting tomorrow (Sunday, April 3rd).  The goal obviously is to make it more affordable for consumers to purchase a 3G enabled Android tablet, and for Samsung to gain a little bit more market share from Apple’s iPad.

The problem with the Galaxy Tab is that it’s running Android 2.2 and there is no guarantee the device will get an update to Google’s tablet specific OS, Android 3.0 Honeycomb.

Android 3.0 Honeycomb is designed specifically for tablets, making it more optimal device.  With the Galaxy Tab running 2.2, and no guarantee of an update, even the dropped price of $199 is too much.

Then consider that with Sprint, you’ll have to get locked in to a 2 year contract with the Galaxy Tab.

Just hold off, if you can, for more Android 3.0 Honeycomb enabled tablets to come to the market.  You can already get the Motorola Xoom, which is an Android 3.0 tablet, but then you’ll be forking out a whopping $599.