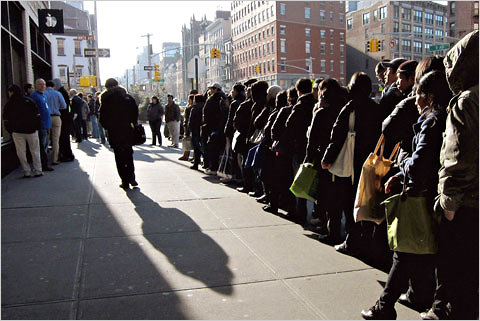 Why is it when the iPad 2 released, lines formed more than 2 or 3 blocks or longer to wait to get one?

Even today, lines will form down the block if people know that the retailer has a sufficient supply of iPad 2’s.

In fact, the supply and demand of the iPad 2 is so out of balance that you can, in some cases, find an iPad 2 on Craigslist for more than $1000 – and people will actually pay that without thinking twice.

But now look at all of the other tablets on the market. The Android tablets like Samsung’s Galaxy Tab or the recently launched Motorola Xoom.  I think you’d be hard pressed to find any instance where a line formed for people to get their hands on one of these Android tablets.

No lines, no craziness, no passionate fans waiting for days in the freezing cold.

So what is it about the iPad?

There is nothing else like it an entire the world, nothing compares, nothing can even compete because it’s so unique and it is, all by itself, an anomaly in the marketplace.

Sure, other companies will make money off their tablets, but nothing is even close to the iPad.

It’s weird, when you get to thinking about it…