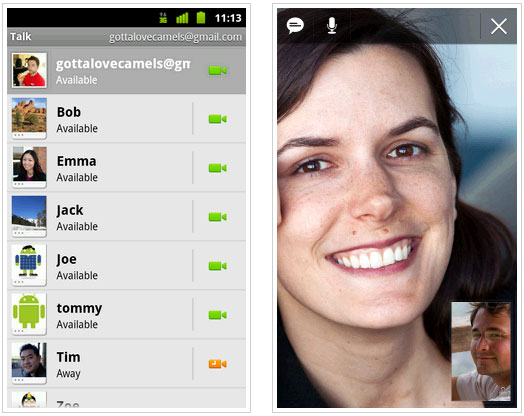 Google just announced plans to launch video chat for Android smartphones.  This is a big deal for Android, especially in light of the mobile video chat competition coming from Apple’s FaceTime app running on iPhones and iPads. The major difference with Android is you’re now talking about video chat capabilities across multiple smartphone and tablet devices. Whereas with FaceTime, you get video chat on iOS devices.

Google explained, “You can now video or voice chat with your friends, family and colleagues right from your Android phone, whether they’re on their compatible Android tablet or phone, or using Gmail with Google Talk on their computer… you can make calls over a 3G or 4G data network (if your carrier supports it) or over Wi-Fi.”

“In your Google Talk friends list, a video or voice chat button will appear next to your contacts and you can simply touch the button to connect with them,” the company adds. “Any text chats from the person you’re talking with will be overlaid on your phone’s screen so you can read them without having to leave the video.”