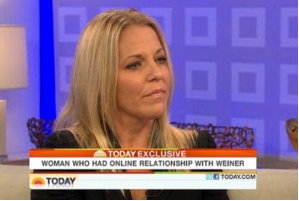 Traci Nobles, one of the women engulfed in Congressman Anthony Weiner’s scandal, took to NBC’s Today Show on Friday to talk about her interactions with Weiner via Facebook.  According to Traci Noble, the 35 year old cheerleading coach from Georgia, says that the exchanges made via Facebook chat and video messaging was more than just sexual.  Noble says that the exchanges over approximately an 8 month period were not just sexual – they actually exchanged music and talked about life in general.