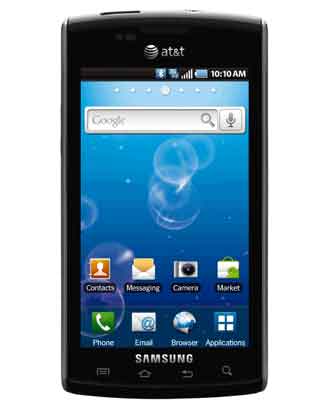 I’ve written before about how I’ve owned the iPhone since 2007.  Yeah, I was one of those guys that got in early on the new phenomena that hit the mobile phone scene.  But after nearly 4 years of the iPhone, I felt it was time to move on to something new.

I have to be honest with you though, one of the main reasons I started thinking about switching to an Android phone was because on the iPhone, I started having problems with muting people while I was holding the phone with my shoulder.

So the biggest problem to me became simply that the homescreen wouldn’t, or couldn’t lock while I was talking on it.  And if I did get the screen to lock, as soon as I would move it the screen would unlock and then I would mute people again.

So I went into Sam’s Club today and picked myself up a Samsung Captivate.  The screen is the same width as the iPhone but it’s about a half an inch longer, giving you even more screen width while playing games horizontally.

Not bad – paying around $1 for a new Android smartphone.

I’m pretty psyched to start learning everything I can about Android now!

was it because your 2 yr was up (or within 4 mo of being up) with at&t and you were eligible for an upgrade?? i’d love to switch for the very same reason you mentioned… seems silly, but it annoys me ;)

well I was able to upgrade because I was eligible for an upgrade – but that was the case regardless of the phone – Sam’s Club just so happens to have a couple of Android phones that you can buy for .97 cents

I’m also curious as to why it was only $.97…was that a special offer for switching?

what sams club store did you find this in??