But it’s now official – Apple has won the bid to build their Apple Store inside of Grand Central in New York City.

The store will be a whopping 23,000 square feet which will make it the world’s largest Apple store.  New York City’s financial board will approve the 10 year lease to Apple sometime today. 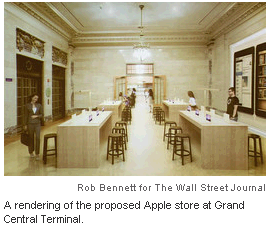 What’s interesting is that Apple delivered the bid for the new store to the Metropolitan Transit Authority in a linen-lined box, symbolizing an expensive gift was being sent.

And funnier still, the blueprints for the new store are set to arrive on a velvet pillow.

Not cheap by any means.  But on the other hand, imagine the amount of people that will be through the store shopping, especially when Apple has a new iPhone or iPad coming to market – when that happens, it will be chaos inside the GC.