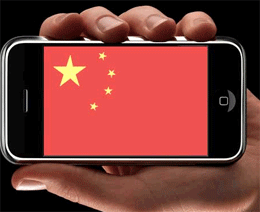 According to Apple COO Tim Cook, Apple is only “scratching the surface” in the China market with only four stores nationwide and a measly 9% smartphone share.  Not to mention the near unlimited potential with the iPad.

The same thing happens in China that occurs in the United States when a new iPhone is released – lines extend blocks, and people are willing to endure nearly any condition just to be one of the first people to get a genuine Apple iPhone.

And with this many people in the country of China, and with the growing influence of smartphones worldwide, we’re talking about a substantial market potential for Apple.  And honestly, any company that can penetrate the China market is game for explosive growth.

It’s already been proven that China has been a ripe market for Apple’s iPhone.  Since 2007, China’s iPhone black market has been booming with some iPhone’s selling for as much as $900 USD.

What do you think?  Will Apple explode with growth in the China market?

What other markets, or companies, do you see as primed to thrive in China?