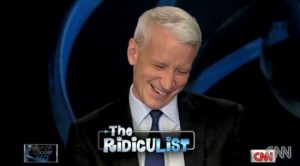 If you haven’t seen the Video of Anderson Cooper’s laughing fits  you’ll get a kick out of it.  The video clip from CNN is pasted all over the internet including YouTube.  People are already making hilarious videos and audio clips with Anderson Cooper’s funny laugh by throwing it  on a loop.  If you can find any funny Anderson Cooper videos, be social and let me know so we can add it to this page!

The CNN host began to laugh uncontrollably while making a series of puns about the incident for his “The RidicuList” segment on “AC360” Wednesday night. (Watch the video below.)

Cooper kept stopping to laugh as he talked about the “thes-pee-an” taking a “solo flight to urine-nation” and other pee-related puns, but lost it when he said “at least it wasn’t Depar-two” (as in going No. 2).

“This has actually never happened to me,” he said as he struggled to regain his composure. “You always see this sort of thing on YouTube, and you don’t think it could happen to you.”