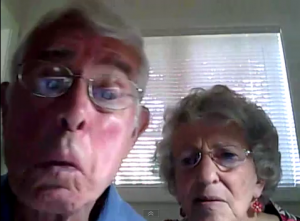 There’s a video going viral very quick of  sweet elderly couple testing out their new webcam.  They don’t seem to notice they are being recorded and keep talking trying to figure out how to take a picture on the computer.  It’s really funny because you have to admire the fact that this old couple is putting in an effort to learn new technology.  When I’m older I hope to stay in the technological loop, hopefully my grandchildren won’t be laughing at me like this couple!

A little later he tells her to drop her dress a little so he can see her on the video feed!