Have you heard about Emma Sullivan’s political tweet yet?  Last week 18 year old Emma Sullivan was at a youth in government conference with  classmates at Topeka High School and submitted a very controversial tweet (at least to officials) that drew thousands of followers and sparks of free speech opinions.

As Kansas Governor and former U.S. Senator Sam Brownback was speaking at the conference, Sullivan decided to tweet this during the address:

Apparently Emma Kate was just joking with friends when she tweeted this, however it was discovered by Governor Brownback’s office.  Brownback officials contacted Sullivan’s high school principal. Sullivan was then asked to apologize for her tweet, and according to Politico, the principal even instructed her to use certain talking points in the apology letter.

“I don’t think I should write the letter, and I don’t think it would be the best move for me,” she said. “At this time, I do not think an apology would be a sincere thing for me to do.”

She also said that she would do it again.

Is there really anything wrong with Emma stating her opinion of Gov. Brownback?  It seems like he’s a big  baby tattle tailing on Emma for this Tweet.  I also think it’s crazy that her principal would ask her to apologize and write a letter to Brownback.  I think it’s great she’s standing up for herself regardless about who she’s tweeting about.  How can your principal tell you to write an apology letter about a tweet anyway?

The hashtag (used on Twitter as a keyword tagging system) #heblowsalot has been used around Twitter to show support for this controversy.  Anyone who has an opinion, please re-post or share this page or use the hash.

Here are some funny #heblowsalot Tweets I found on WebProNews 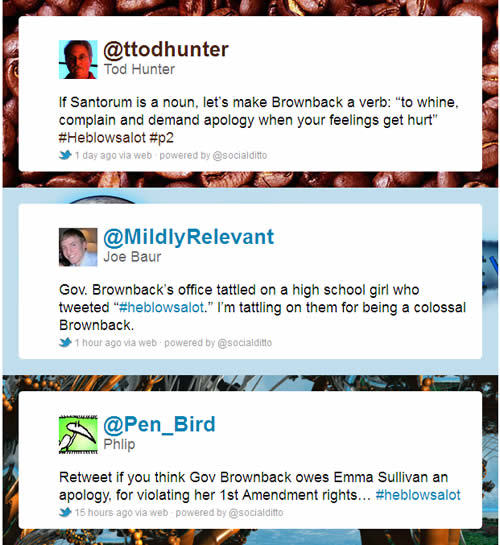