An amazing yet sad story is sweeping the internet.  An 81 year old pilot, John Collins of Sturgeon Bay, went unconscious after suffering a medical emergency.  His 80 year old wife ,Helen, took over even though she isn’t a certified pilot.  While her husband was dying in the seat next to her she landed the plane safely at Door County’s Cherryland Airport. 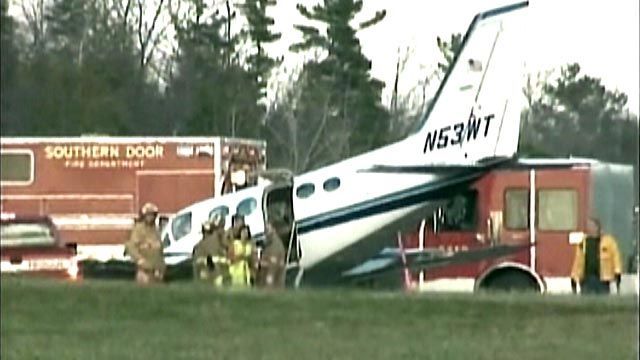 She was guided by two pilots over the radio.  The following is a clip from their communication while landing the plane:

Catherine Vuksanovic, a seasoned flight instructor, communicated with her via radio from the ground.

She says Helen was ready to take control of the situation.

“I said ‘Hi Helen this is Cathy, how are you doing?’ ‘Well I’m doing ok,’ she said, but she said, ‘I’ve got three people talking to me at once, and I can only talk to one person at a time.'”

That one person became Catherine’s husband, Robert Vuksanovic, a pilot with 28,000 hours of flight experience, who coached Helen Collins from the air.

Robert Vuksanovic flew next to Collins, helping her align the plane with the runway.

He says the biggest challenge in landing is pointing the nose of the plane up. Fortunately, this was a technique Helen learned from her husband.

“I think if you will just through osmosis, just living together and flying together, they flew a lot,” explains Robert.

Helen Collins was taken to an area hospital after the incident, she has since been released without injuries.

Her husband, John Collins, was pronounced dead at the scene due to his medical condition.