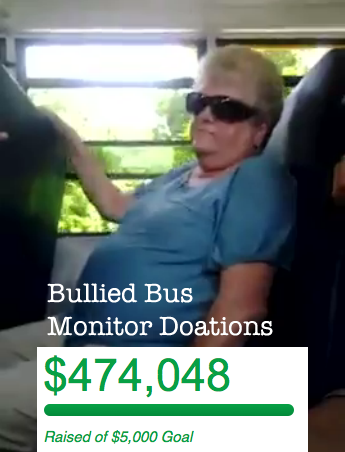 Have you heard about the bus monitor who was bullied by NYC children on a bus?  If you haven’t you might want to check out the video below.  Warning:  it is vulgar and disgusting the way these kids treat here.  The plus is that it’s seeing national recognition, went viral, and now people are donating for Karen Klein on IndieGoGO.

Below is a video of a 68-year-old bus monitor named Karen Klein being verbally harassed by a group of middle schoolers on their way home from Athena Middle School in Greece, New York. Throughout the ten minute video, you can hear the kids verbally berate the woman, calling her a bitch, fatass, poor, ugly, and various other words of the like. At one point in the video, you can hear one of the kids yell, “You’re so f****** poor you fat ass,” in which Karen responds, “I try to live by some of these words, I try and it’s really hard,” referring to the words on her purse. Now, I don’t know about you, but that broke my fucking heart. There’s even a point in the video where one of the kids touches Karen’s arm in an attempt to make fun of her. I’m not sure why these kids would want to bully a senior citizen to tears, but I feel we should do something, or at least try.

The above description is from the website IndieGoGo, where everyone is now donating for Karen Klein, the Bullied Bus Monitor.  Her donations reached over $450k today!  It’s amazing what can happen when people come together and truly care.  Social media is amazing when used for good, isn’t it?  On the other hand there are people who use if for bad.  I found this horrible article on BarStoolSports.com where one person is saying that he thinks the donations are stupid.  This person obviously has no heart and is jealous of the money raised.  Just take a look at bar stool sports and you’ll find his letter.  I don’t want to post it here because it’s so horrible.