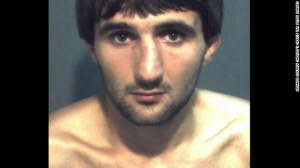 Ibragim was shot after conflict between him and the FBI agents while they were questioning him.  It grew increasingly obvious he had a part in murders in 2011.  Todashev was shot after the confrontation.  Apparently the FBI had linked him to the Tsarnaevs brothers, who were the primary suspects of the Boston Bombing.  They found the deceased Tsarnaev brother’s name in his phone contact list.