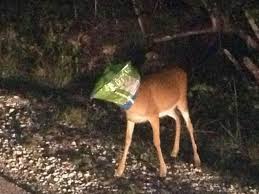 The crunch and taste of Doritos has been taken to a whole new level. Last Saturday two Monroe County Sheriff’s officers had to rescue a deer that had its head trapped in a Doritos bag. The officers reported seeing the odd event on Saturday near Port Pine Heights, which is a subdivision of Big Pine Key in Florida.

Unusual for the behavior of a deer, which is very skittish and afraid of people, it didn’t run when it heard the approaching footsteps of the officers, but stood perfectly still. The deer was discovered to be a Key deer, noted for being one of Virginia’s smaller white tailed deer species. This could have turned into a tragedy if any animal were killed due to careless littering by humans, but especially for the Key deer. The US Fish and Wildlife Services stated that the deer’s population has decreased dramatically due to hurricanes, floods and other natural disasters, causing them to lose most of the habitat and die off. Although the Key deer was once near extinction, it is estimated that there are around eight hundred of them left in the United States. Still, the unnecessary death of one would have been heart breaking.

The Key deer did allow deputies to remove the bag from its head without any hesitation and then quickly ran off into the woods, leaving everyone to conclude the deer suffered no injuries.

Authorities do believe the deer got its head stuck in the bag accidentally and that no one did this on purpose. The deer was simply doing what we all do; searching for that last chip.
Strangely enough, this isn’t the only deer rescued over the weekend. In Minnesota a woman rescued a deer with its head stuck in a jar. This just proves that we as humans need to be more conscientious about our garbage and stop littering before one of these helpless animals dies.