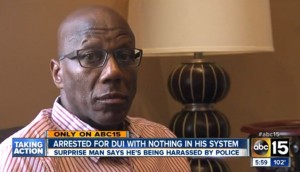 Police arrested a sober 64-year old man in Arizona although his breathalyzer test showed 0.000. According to The Daily Mail, Jessie Thornton got pulled over last week as the police saw that he crossed the white line on the road. Thorton shared his experience with ABC 15 saying that the police officer walked up to him and told him that he can see that Thornton is driving under the influence by looking in his eyes. Thornton had been swimming earlier, but still had to go through a sobriety test. He explained to the police that he has bad knees and an upcoming hip surgery, which is also documented in his medical papers.

After that, two more officers came and started their sobriety test. During the test an officer shined light in his eyes and asked the other officer if it was done right.
After the initial test, Thornton was handcuffed and later taken to the local police station for a breathalyzer test. The test showed that there was no alcohol in his system as the blood alcohol level was at 0.000.

After the breathalyzer test, an expert was brought in to test his system for drugs. The expert told Thornton that he should never have been arrested and wrote a statement that there was no alcohol or drugs in his system.

While all that was going on, Thornton’s car was impounded. Also, the Arizona Motor Vehicle Division was told of the arrest and shortly Thornton got a message that his license was suspended and that he had to take a drinking and driving class.

Thornton told ABC 15 that he believes to have been arrested for being black, not for DUI. His lawyer also said that this was a clear case of DWB – driving while black. Now Thornton is suint the police department for 50,000 USD.

Although the DUI charges are now dropped, Jessie’s lawyer feels that it is not enough as his client was arrested for nothing.