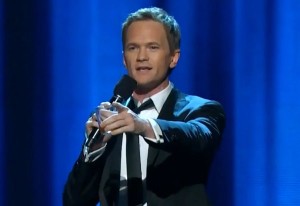 Actor Neil Patrick Harris delivered a once in a lifetime performance as the host for this year’s Broadway award show, the Tonys. Harris opened the glitzy gala event with a spectacular song and dance performance, paying tribute to over a dozen musicals and shows featured on Broadway this past year. The 39 year old actor, well known for the “How I met your Mother” hit sitcom, started off the night’s events with a deceptively slow tune accompanied by guitar. Neil Patrick Harris then declared that “tonight… we go bigger… It’s Broadways’ biggest night”, guaranteeing the audience a “truly legendary show” and proceeded to launch into a colorful, energetic performance that few other hosts could rival.

Neil Patrick Harris kept up an amiable banter throughout the glamorous event, maintaining the starry-eyed audience at the legendary Radio City Music Hall with jokes and laughter. Harris tipped his hat to new musical Kinky Boots, wondering how the cast managed to perform in outrageously high heels. Harris also poked fun at the 2012 film adaption of the musical Les Miz, asking for a close up a-la Tom Hooper to show that Broadway performers don’t need to prove that they are indeed singing live. In a comical aside, Neil Patrick Harris kissed Sandy, the doggie star of the classic musical Annie, cracking up the audience with his quip to the pooch, “You do know I’m in a relationship, right?”

In his fourth time as host of the prestigious Tony Awards, Neil Patrick Harris brought it all to the table, delivering an incredible and energetic performance, complete with strong vocals, acrobatic hoop jumping, magic disappearing tricks and a notable guest appearance from tuxedo clad boxing legend, Mike Tyson, in a spectacular dance number. Neil wrapped up the incredible night with a memorable vocal performance, accompanied by performer Audra McDonald, where he paid tribute to all the winners of the evening’s awards.