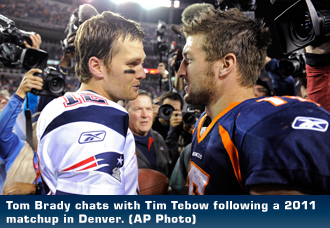 Tim Tebow’s life off the field seems to be more interesting than on. Sure, he has won a playoff game, but why else would a potential 3rd string quarterback be making the news? What is Tebow going to bring to the Patriots? The answer may not be much, but more so, the Pat’s may be benefiting Tebow.

This may be his last chance to make any headway, develop and become a starting NFL quarterback {or should I say player?} again. In college he was fun to watch, but it soon became apparent his style wasn’t fit for the big leagues. Coach Bill Belichick apparently wanted to draft the 2007 Heisman winner. Tebow will have to put his nose to grindstone, show some potential with the limited snaps he’ll get and then maybe the Patriots can get a good trade for him in a few years.

The details of the contract aren’t yet released. There’s no guarantee he will even make the roster. There is some talk that he may even be tried at tight end. How the mighty have fallen. Although, Tebow’s football prowess can’t really be blamed for all the scrutiny he gets, though his fame and name recognition may have something to do with why he is still in the NFL. Many assumed he was all but done after the Jets cut him earlier this year, with no prospects on the horizon.

Tebow will be reunited with his offensive coordinator from the Broncos, Josh McDaniels. This is good news for Tebow since the Patriots run a complex offense and he has had a winning relationship with McDaniels in the past. The Patriots released their third string QB, Mike Kafka on Monday. The Patriots are one of those clubs that have the depth and patience to take on a veteran like Tebow. They like to develop talent and have the wherewithal to weather the coming storm of Tebowmania. The signing comes just in time for the Patriot’s three day mini-camp, where eyes will be glued on the controversial star.