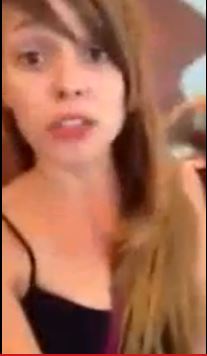 Taylor Chapman, a 27-year-old woman who hails from Florida, apparently has a pet peeve with regards to a minor mistake in customer service. She claimed that a receipt was not given to her when she purchased from a Dunkin’ Donuts store and decided to capture a video as proof that she would be compensated with free food as per the company policy in such an event that a customer was not provided a receipt upon purchase.

She ultimately cursed on the establishment’s employees, calling them names that only made the matter worse. The workers, however, dealt with her in a very professional way and her intention of making the store look bad suddenly backfired on her. Her attitude and approach to the Dunkin’ Donuts employees caused an uproar from internet users who saw her video and gave her a lot of negative feedback instead of supporting her cause.

Moreover, Dunkin’ Donuts stated that they are proud to have them as employees and they will be recognized for their effort in guaranteeing customer satisfaction as well as being compliant with the company’s policy. Ms. Chapman did not expect that to happen and she took down her Facebook page after the feedback that was given to her had risen. Her video went viral on the internet due to the fact that there were a lot of people who were appalled by her lack of respect to others.

Neither her degree in education nor her boyfriend, whom she claims she is currently engaged to, can save her from the angry mob that she has clearly offended with her racist rants. It is always important to remember that the motto “the customer is always right” does not have to be taken to extremes. People are not tolerant of such things and she should learn from this mistake.

immature brat who probably sucked dick to get through college and feels the world now owes her..