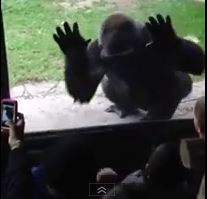 A gorilla from Dallas Zoo’s exhibit on western lowland primates has become an online attraction. Earlier this year , this gorilla was the object of taunts being hurled by a group of visiting school children. However, the reaction they got was not what they anticipated.

A reaction, however, was exactly what these hyperactive Texan children were seeking from the giant ape. Feeling secure behind protective glass, they kept shouting “You ugly!” at the gorilla, making whooping sounds and beating their chests. At first, the gorilla elected to ignore the children’s taunting, and continued grazing at the grass it had been near when the kids arrived.

However, as the ridicule continued unabated, the ape became visibly irritated with the sneering school kids, looking at them in a disapproving way. However, although the children became louder and louder, the animal made no move until one of the kids made the mistake of pointing his finger directly at the gorilla. This was the final straw, and the action that the gorilla took put a stop to any further taunting.

In reaction to the pointing, the enraged gorilla quickly pressed its face and hands against the protective glass, and emitted a no-nonsense roar. The children, who had felt emboldened behind that glass, were visibly jolted and immediately fell silent. The suddenness of the gorilla’s movement caused them to lose their nerve, and a genuine fear of the animal they had so fearlessly insulted moments earlier spread among them.

For the gorilla’s part, it seemed quite pleased that its sudden action had such a paralyzing effect on its tormentors. It nonchalantly moves away from the glass to enjoy the return of peace and quiet, pausing to look disdainfully back at the children it had given a lesson in manners to that they will not forget in a hurry.