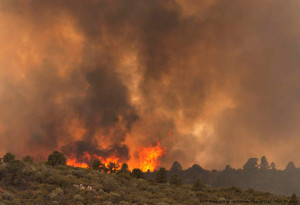 19 firefighters from an elite team were killed by a devastating Arizona wildfire on Sunday while they were trying to save themselves by using fire resistant shields. The officials lost contact with the elite crews around 04:30 pm, Sunday
and later their bodies were spotted by a helicopter crew. The wildfire is believed to have started from Yarnell on Friday through the strike of lightening. The fire so far has spread across 6000 acres according to Mike Reichling, the Arizona incident commander. The firefighters are still battling with the wildfire, trying to take it under control.

It was revealed by the authorities that eighteen of the victims who died during the incident were the members from the Prescott Granite Mountains Hotshots. However the identity of the other victim was yet to be confirmed. According to the National Fire Protection Association, this is one of the deadliest wildfire casualties in the history of the US firefighters since 1933. This is also the biggest casualty that firefighters have suffered since the 9/11 terrorist attacks that claimed the lives of as many as 340 firefighters. The firefighters who died this Sunday also worked in the recent New Mexico and Arizona fire.

It is to be mentioned that the “Hotshot” crews are the trained elite firefighters who travel miles into the wild with heavy equipments in order to create lines of protections between the wild fire and civilians. They usually remove anything from the way of the fire that may lead it to locations like cities and towns.

President Obama, who is currently in an official visit to Africa has issued a statement today addressing the 19 firefighters as heroes who sacrificed their lives to protect others from the devastating wildfire. Jan Brewer, the Governor of the State of Arizona in a statement termed it as a “dark day” and recognized the level of risks the firefighters have to deal with in their professional life while carrying out their duties.