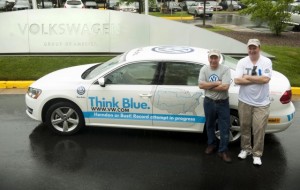 Recently, drivers Gerdes and Winger drove a Volkswagen in a 48 state tour across the lower United States, setting a new world record. They beat the previous record of “lowest fuel consumption”, which was set at 64.6 mpg for a non-hybrid vehicle. On their 14 day, 8,122 mile journey, they achieved 77.99 mpg, 13 mpg higher than record for a hybrid vehicle. The pair left the Volkswagen headquarters, Herndon Virginia, traveled through the 48 states, and then ended their trip back at the Herndon headquarters. Diesel vehicles have a history of getting excellent gas mileage, and Volkswagens have held records in the past. This new trip adds another trophy to the Volkswagen mantel.

This particular Volkswagen is rated ordinarily at 43 mpg on the highway. However, the primary driver, Wayne Gerdes, used hypermiling techniques such as steadily increasing speed from stopping, using momentum to top hills, and obeying posted speed limits. Gerdes, who created and runs a website called cleanmpg is an expert hypermiler who has previously beaten World Record in other vehicles. Through his website and record breaking events, he helps increase knowledge of hypermiling and how the everyday person can increase their miles per gallon.

Volkswagen is pleased with the results of the trip. In a press release from Volkswagen, CEO and President of Volkswagen of America, Jonathan Browning, states that the recent record breaking trip proves their vehicles can be highly economical. He is happy to boast that Volkswagen has at least six vehicles that get 40 miles per gallon or higher highway mileage. While Gerdes may be an expert, both he and Browning feel that excellent miles per gallon are achievable by everyday average drivers.