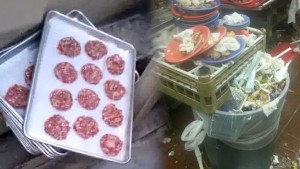 You may have eaten a meal at a restaurant where you suspect it’s been taken out of the trash and served back up for you. Unfortunately, this is exactly what happened in a Golden Corral restaurant at Port Orange in Florida.

The scandal began when 21-year-old Brandon Huber, an employee at the well-regarded restaurant, uploaded a video to YouTube called ‘all you can eat ribs’. In it, he gives the viewer a tour of the back of the Golden Corral restaurant, where the managers had prepared for a food inspection by putting their produce next to the dumpsters. “Look at all these flies,” he says in the video, focusing the camera on several specimens flying over the hamburger meat.

The video itself has gone viral, attracting over 2 million views in the space of nine days, with people in the comments section rallying with Brandon in calling this act sick and disgusting.

The manager that gave the other for the Golden Corral dumpster scandal has since been fired by the restaurant’s owner, Eric Holm. “A video was recently posted showing an incident of improper food
handling at our Port Orange, Fla., location,” he said. “None of these items were served to a single customer. All were destroyed within the hour at the direction of management. Brandon Huber, the employee who made the video, participated in the disposal.”

Unfortunately, these actions appear to be too little too late, as it has already attracted the attention of Florida’s Department of Business and Professional Regulation, claiming that an investigation is now in progress.

The story about the Golden Corral dumpster is yet another example of managers abusing the trust of their own customers. With the story of horse meat being passed off as beef in the UK, many people are now eyeing their local meat producer with suspicion. It’s clear that if the company’s still want to gain revenue in the future, they will have to first re-earn the trust of their now cautious consumer base.