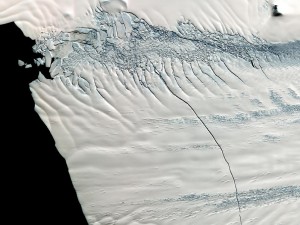 The Pine Island Glacier that happens to be the fastest flowing and longest glacier in the Antarctic region has produced a king-size iceberg. This huge block of ice measuring around seven hundred square kilometers is roughly eight times the land area of the Manhattan Islands in New York city. The first cracks and a spectacular one at that were first observed by scientists in October 2011 and they have been waiting ever since for it to calve itself apart. The good news of the fissure having extended itself over the entire length came in on Monday after detection by the German satellite TerraSAR-X.
The TerraSAR-X satellite has been specially designed for detecting the surface of the ice stream by means of a radar instrument although the entire continent is, at present, shrouded in winter darkness.

The huge iceberg that broke apart was from the PIG ice-shelf. This is the front portion of the glacier that lifts and floats along with the glacial movement towards the ocean. The shelf itself stretches out tens of miles beyond the grounding line. The German researchers have been monitoring the images from their satellite in order to get a better understanding of the processes that create the glacial movements and prompt the occurrence of fractures. They also hope that this will be the step forward for them towards improving their computer models that forecast the future changes in the Antarctic region.
The creation if this iceberg, scientists say, is a very natural process and should not be attributed directly to the factors of climatic changes that have in fact significantly affected the Western Antarctic Ice Sheet.

After the initial sighting of this huge crack by a NASA aircraft in 2011, many experts believed that the occurrence of the final calving would be just a matter of time. It is therefore something of a matter of surprise that the event took almost two years to actually take place. It should not be a surprise though, that the event took place in the middle of winter when the sea is virtually covered in ice. This relatively thin covering is in no way a match for the internal stresses that present itself in the huge mass of the ice shelf. It would now be an important point of observation to see how long the mammoth ice chunk takes to move out of the bay into the ocean as TerraSAR-X provides the all important data.
The largest recorded iceberg in the world so far has been the tabular block that broke off from the Ross Ice Shelf in 2001 and came to be known popularly as the B-15. With a total surface area of almost eleven thousand square kilometers, it was years before it melted and moved out into the Southern Antarctic Ocean.