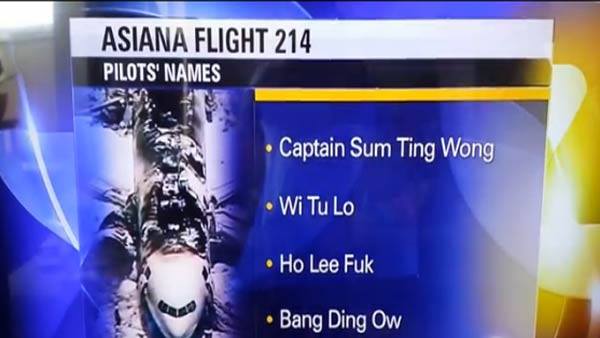 Asiana Airlines which is a South Korean airline seeks redress in court over the listing of fake names by a San Francisco television station. Additionally, the same airline firm said on Sunday that it was planning to conduct highly integrative and well-followed up lawsuits against United States transport authorities for mistakenly confirming as well as airing false names of pilots behind its fatal crash recently in San Francisco.

A KTVU-TV news anchor read the names on air Friday as ”Wi Tu Lo”, ”Sum Ting Woo”, ”Bang Ding Ow” and ”Hoo Lee Fuk”. Confirming the National Transportation Safety Board (NTSB) as its ultimate source, the news company later realized the mistake and apologized. Blaming the mistake on an intern, the NTSB later confirmed the names as fake, inaccurate and offensive. However for the Asian Airline Company, they recognized the names and report of the crash as a serious source of offense in tarnishing the name and dignity of the firm alongside its operational efficiency.

To make it even worse, the report by the San Francisco company was accompanied by some graphics with the phony names well listed beside in the crash that occurred on 6th of July, killing three and injuring many on board. And since the video was a broadcast, it was spread across the internet therefore encompassing a great deal of viewers. Asiana suing KTUV-TV, it seeks to demand the TV station to strongly respond to the racial discriminatory report released hours after the agonizing crash.

Speaking from Asiana offices, Asiana spokeswoman Lee Hyomin stated that the airline company decided not to sue NTSB because it was solely the TV station that aired the offensive names as opposed to the United States federal agency. And since neither the agency nor the radio station responded immediately to emails sent, Asiana hopes that finally justice will be accorded and restore harmony and understanding between the company and its customers.