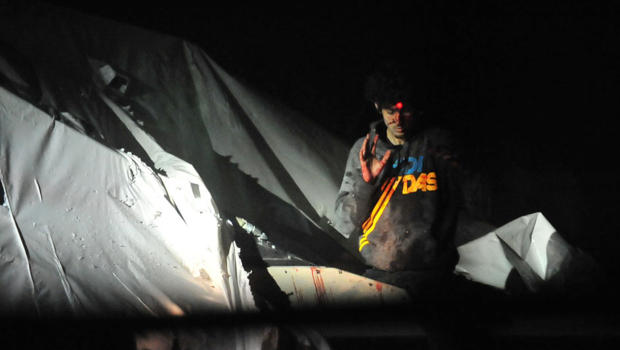 When the Rolling stones idolized one of the Boston bombers on their cover album, a state police officer by the name Sean Murphy released photos of the bomber from the day he was captured. The angered photographer did this in order to show the world the gritty side of the images that were increasingly becoming popular on the internet. The photographer released the photos on Thursday 11th of July 2013 to Boston magazine. These photos show Dzhokhar Tsarnaev looking downcast with a red dot sight on his forehead. This was a much different portrayal of the bomber from the image used by the Rolling stones.

The photos were taken by the police photographer Sean Murphy as Dzhokhar Tsarnaev hid in a boat. Dzhokhar Tsarnaev was bleeding lying down in the boat looking desparate for a way out of the dire situation. Sean Murphy later released a statement to the Boston Magazine stating just how much these photos showed the true Boston Bomber. To him, this showed the ‘evil’ bomber for who he truly is. The Boston bombing that took place on 15th of April 2013 killed 3 people and injured 260 more. Apparently, the Boston police did not sanction the release of the photos. This might have resulted in dire consequences for the photographer.

David Procopio, the state police spokes person, later stated that the police did not sanction the release of the photos. Clearly, the police are distancing themselves from the storm brewing due to the release of these photos. John Wolfson, the editor to the Boston Magazine tweeted that Sean Murphy was relieved of duty. There are also reports indicating that Sean Murphy may be undergoing an investigation. What started as a lash out at the Rolling stones by Sean has turned out to be a direct targeting of the photographer. To Murphy, the image used by the Rolling stones on their album is an insult to the police department and the officers who died in the process of arresting Dzhokhar Tsarnaev.