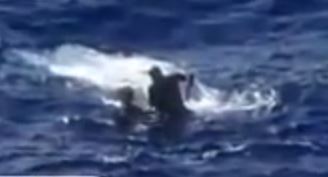 The sea off the coast of Hawaii has more to offer than just the most spectacular sights.The news of a 54 year old fisherman rescued by the Coast Guards after his 14 foot long boat capsized, is indeed newsworthy for it wasn’t the wind or the rough choppy weather that caused this man to almost lose his life-it was in fact a 230 pound tuna!

Anthony Wichman was on his usual fishing trip almost ten miles south west of the Port Allen, near the island of Kauai, when he felt a certain tug on his line .Wichman had almost dragged the 104 kilo tuna on to his boat little realizing the fight that was still left in the creature.The Ahi Tuna with its massive weight not only flipped right back into the water but went deep to escape getting caught again. Wichman whose leg was entwined in the fishing line too was pulled into the deep waters.

It was sheer luck or grit that made the fisherman free himself from the line and make his way back to his boat.Thankfully his water proof mobile phone still worked and he called up his family immediately.His daughter is supposed to have said that all she could hear was her father gasping and puking and saying three words -‘sinking, Coast Guard, buoy’.What was indeed lucky was that Wichman had been fishing near a prominent buoy which helped the Coast Guard to track his boat using the GPS. Quick to react at the call sent, the alert US Coast Guard under Lieutenant Jessica Mickleson, sent helicopters out to the sea for the rescue mission.Boats with rescuers were able to locate Wichman while his friends too reached the almost capsized boat to help tow it back.

While the GPS on Wichman’s phone may have been a primary reason for his successful rescue there’s no denying the fact that it was a lucky escape as the fisherman had sustained only minor injuries. The Coast Guard rescue team called it the’perfect rescue’ as they managed to not only tow in the boat but also brought home the catch- the ginormous tuna still on the line!