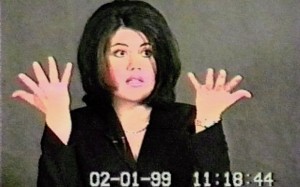 Monica Semmile Lewinsky, born on 28th July, 1973 is an American who had an improper relationship with the then US President, Bill Clinton. She worked in the White House as an intern between 1995-1996 where she tried to seduce the former president. The scandal was famously referred to as Lewinsky Scandal and was leaked in January 1998 by Linda Tripphe through secret call recording.

She made the three minute, forty seven seconds sex tape in November 1997 with the assistance of a cleaner hired by people close to Lewinsky and sent it to “handsome” who was none other than Bill Clinton. The hired cleaner was suppose to shred the tape in late 1998 but kept it but the secret copy has now surfaced after 15 years. The National Enquirer obtained the sex charged tape and has been hitting the headlines online.

In the tape, Lewinsky is heard panning a secret meeting with the president desperate for another encounter since their last ’60 seconds’ wasn’t enough though the president looked handsome. Lewinsky says that she could take her clothes off and asks the president if he won’t enjoy that. she says she hopes to see her later and hopes he followas her script and do what she wants. she claims to be cute and adorable to be ignored.

Lewinsky orders the president to instruct Bettie Currie,his secretary to plan the meeting without formally recording her visit. she tells the president that he pre-plans with Currie to leave office at around 7, 7.30 then the president would sneak back and she would sneak too then have a nice little vist for 15-30 minutes depending on what the president wanted. All this is what Lewinsky said in the sex tape which was delivered to oval office by Ken Starr.

This revelation may derail Hillary Clinton’s hope of running the US top office in 2016 elections.