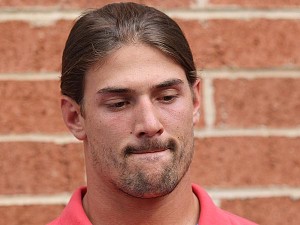 Riley Cooper famous being an American football wide receiver for the Philadelphia Eagles is in the news for wrong reasons recently. The National Football League player racially abused an African- American security guard at the Kenny Chesney concert that he had been to. Riley Cooper was caught on camera using the racial slur, the N-word to the security guard. Riley who is famous among the people for his personality is shocked and hurt at the image he has formed overnight. He said, he was drunk at the concert and had no reasons for using the racial slur.

The Riley Cooper racial slur has become a talk of the town especially in the sports industry. Riley publicly apologized for his behavior not once but many times and through different media. He also apologized on Twitter and also said that he was disgusted at his behavior. He expected the people to sympathize his mistake and said that he was extremely sorry and that he is not such a person as has been depicted by the incident. In the meanwhile, the Eagles have fined him for his behavior and have regretted his behavior.

Football is a game where people from different places and races mix together to make the team worthy for win. In such a place, a player like Riley Cooper may have an adverse image now with this incident. It may happen that his fellow team mates may have differences with him and ultimately Eagles might suffer. It will be interesting to see how the new coach of the Philadelphia Eagles Chip Kelly handles this new found crisis in his team. Football is game of the lively and the spirited ones and this Riley Cooper racial slur on the security guard has just caused a spot on the game, which needs to be washed soon else the game shall suffer.