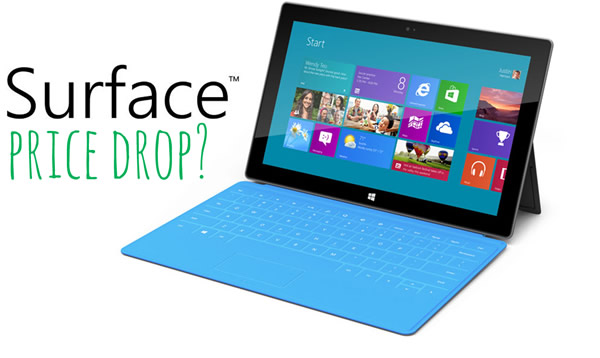 In an effort to attract more business and to answer the calls of its customers wanting a more affordable tablet, Microsoft Surface Pro price drops $100, a discount that applies to the 64 and 128 Gigabyte models. Along with the tablets, Microsoft is also including a discount bundle which includes a Microsoft Surface Pro, Home and Office Student 2013, a two-year warranty, type protector, screen cover and carrying sleeve. The discounts are a way to get people interested in RT machines again and it will last until the end of the month, so people still have plenty of time to purchase a Surface Pro before the discount is no longer applicable on August 29, 2013. Given its newly affordable price and how short the discount’s duration will run, those people who are wanting to purchase this tablet should do so, before the $100 price decrease has run its course.

The Microsoft Surface Pro is described as being a “tablet in laptop form,” meaning that it is a tablet computer that comes with a stylus and keyboard. It runs on Windows 8 and is both Wireless Internet and Bluetooth compatible. It can use a MicroSDXC card if more memory is needed, it has one USB port and a headphone jack. It runs on an Intel processor, like most Microsoft computers do. Despite its appearance though, the Surface Pro is not to be mistaken for being a laptop, as it is a tablet. The Surface Pro is quite similar to an iPad, even though it is not an Apple product, which should make fans of tablet computers quite happy. There are quite a few different accessories that can be purchased for it as well, ranging from carrying sleeves and keyboard covers (called Type Protectors and Touch Protectors), to additional power supplies and adapters. As it is a Windows 8 tablet, the Surface Pro can use any software that other Windows 8 tablet computers can.

Do you think this is because Microsoft is struggling with their tablet competitors, ie: Apple Ipad?